Review current and past awards on these pages

The Awards notes are prepared and edited by Brenda Pickett

Each year, members of the Civic Society look out for projects to be considered for our annual awards. We look for high quality new developments, or restorations of historic buildings or features that make a contribution to the appearance and general quality of the local environment.

Suggestions may include domestic, commercial or public buildings or landscape features, and may vary in size from a large housing scheme to a small but noticeable improvement to a single building in a “tired” area. The selected schemes must be completed during the year to October, and be situated within or close to the general area of Weymouth, Portland and Chickerell.

The principal award for a project of exceptional merit will not be awarded in a year where no such project is recognised. Where a principal award is made, the Society will supply one of their familiar blue plaques for display on or near the property concerned. Plaques are not supplied for other levels of award. Note that only plaques supplied by the Society may be displayed to publicise Civic Society appreciation, and in some circumstances Council Planning approval may be needed for such a display.

No Awards were announced in 2020 for Covid 19 related reasons.
Arrangements for the next ceremony will be published early in 2021.

RESTORATION AND CONVERSION OF THE FORMER ROYAL NAVAL CANTEEN BUILDING

This significant building in the history of the Naval Base and Royal Naval Air Station at Portland, built in 1906, had been lying empty for around 20 years, with no plans for its future coming to fruition.  Now, under the current ownership, it has been converted to 22 apartments on an affordable shared-ownership basis, as part of a housing scheme totalling 68 dwellings.  The refurbishment work was challenging, with severe technical problems.  The Certificate of Merit is awarded for the fine restoration and conversion, ensuring the preservation of this important building without compromising its external appearance.   It is a welcome contribution to the regeneration of Castletown and Osprey Quay.

48-49 THE ESPLANADE WEYMOUTH, WITH ROCKFISH RESTAURANT

The Commendation is awarded for the renovation and conversion of the former Dorothy Inn, an important Georgian building, which dates from the early development of the Esplanade.  Seven apartments have been created, while the ground floor has been fitted out and occupied by Rockfish Restaurant.  The historic character of the property has been maintained by sensitive work and further enhanced by the re-creation of an open balcony at first floor level, and improvements have been made at the rear.  Altogether, the newly refurbished building, with the ground floor restaurant, enhances this part of the Esplanade.

The Commendation is awarded for the renovation of this historic building dating from around 1800, situated in the heart of the old town.  Having been lying empty and deteriorating, it is now restored and converted to two maisonettes in a sympathetic manner to maintain the unified appearance of this important group of three Georgian buildings.

This is an unusual project for the Society’s awards, hence its description ‘Special Commendation’. The fine, sturdy new set of steps to Castle Cove Beach has restored long-awaited access to this much-loved beauty spot, which became inaccessible to the public from above after a landslip several years ago.

The project is highly commendable for the dedication of local people to its achievement.  The construction method enabling the steps to be dismantled and rebuilt in case of further landslips is an added benefit.

In addition to the formal awards, two letters have been written in recognition of community efforts in enhancing the environment:

In acknowledgement of the work of volunteers, who gave their time and effort in re-constructing the ancient, ruined stone wall at the rear of the churchyard.

These notes are prepared and presented by Brenda Pickett on behalf of the WCS Planning and Environment Committee.

An improvement has been made to the appearance of this handsome early 19th century listed building, with ‘tReds’ shop on the ground floor, by the repair and re-painting of the external fabric. This is especially significant because of the prominent location of the building at the junction with St Thomas Street at the heart of the town centre.

This attractive pair of early Victorian grade II listed houses has been repaired and refurbished, including the full replacement of a bow window to match the existing one.  These works are a welcome and encouraging improvement in a highly visible area of the town, on the main access road into the centre.

The crescent of new houses and flats, set around the landscaped car park at Tesco, was awarded a Certificate of Merit in 2016.  This letter is in appreciation of its extension to complete the crescent.  The attractive group of buildings, in Portland stone and render, includes two striking tower features, which make reference to the two historic windmills nearby.  The development is sympathetic to the traditional Portland character and, together with the use of drystone boundary walling, enhances the immediate area and sits well in the local scene.

This Letter is in appreciation of the very attractive lighting scheme which now illuminates the exterior of the theatre.  The light displays give a pleasing variation of effects and make a major contribution to the night-time experience of the Esplanade.

This letter is written in appreciation of the wonderful floral displays throughout the season in the public gardens, notably the magnificent flower beds in Greenhill Gardens and the lovely displays in the grounds of Sandsfoot Castle, with a colourful range of flowers in Radipole Park Gardens.
The dedicated attention by the Parks and Open Spaces staff to creating and maintaining the gardens to a high standard with limited resources is praiseworthy, especially in this difficult changeover
period following the local government reorganisation. 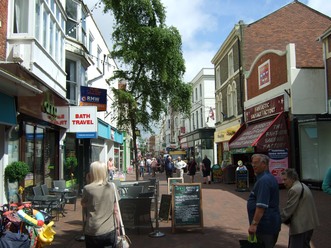 This Letter of  Appreciation is written in praise of the new scheme of hanging baskets in and around Weymouth Town Centre.  Last year the idea was initiated by the Town Centre Manager, with a more limited number of baskets, managed on a voluntary basis. This year the Weymouth BID group have expanded on the theme, with nearly 300 hanging baskets, provided and maintained by a company.  These attractive and colourful displays have enhanced the experience of town centre shopping,
and their installation and maintenance in good and
fresh condition throughout the season is to be greatly
commended.

This Letter is written in appreciation of the repairs, re-gilding and repainting of King George III’s statue and the repair and redecoration of the seven Victorian seafront shelters.  This was carried out by the former Weymouth and Portland Borough Council before the reorganisation of local government.The King’s Statue, made in Coade stone, was erected in 1809 by the ‘grateful inhabitants’ of the town.

The detailed and painstaking work to it,iincluding the application of large amounts of gold leaf, is to be greatly commended, and is particularly important by reason of its historic significance and very prominent position on the Esplanade.

Renovation of the King’s Statue by Osirion Conservation Projects.

The attractive seafront shelters, with their intricate ironwork decorations, are now once again in fine condition. Commissioned by Weymouth and Portland Borough Council. Renovation by Dorset Build and Maintenance Company Ltd.