These Planning Notes are prepared by the the
Planning and Environment Committee
who meet each month to discuss planning issues and review recent planning applications.

Editions from the past 12 months may be viewed via the buttons on the left.

Select the notes you want to view using the buttons below

Select the notes you wish to view using the buttons above

Below are useful links to some key  pages on
dorsetcouncil.gov.uk
and other websites

Tap the button below to search the planning applications database for the local area.

Tap the buttons below to visit the NEWS Pages of our Local Council websites.

Local  Council
Websites
Tap the buttons below to visit our local authority websites.

To view more documents relating to these planning applications . . .

1. Copy the application reference number from this page.

2. Tap the “”Applications” button below to open the planning applications database for the local area. (This takes you to the Dorset Council Website.)

4. Paste the reference number into the Planning Reference Number field.

Then tap “View this application” and select the “View Documents” tab.

We were finally able to host the Society’s Annual Awards Evening at Hope United Reformed Church on the 17th May, with a good audience of award winners and Society members.  There were eighteen awards, covering both years, for projects carried out in the Weymouth and Portland area.  These included the top two Annual Awards with plaques, three Certificates of Merit, eight Commendations and five Letters of Appreciation. 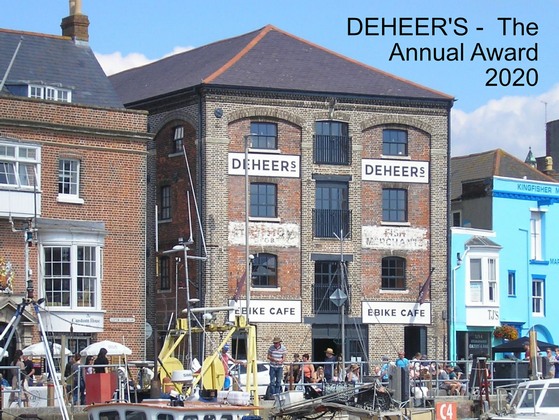 The range of projects commended was very broad, and included major new housing development at one end of the scale, ranging down to the building of a single wall, carried out as a labour of love, at the other end.  The main theme however was the restoration and re-use of historic buildings which had lain empty or under-used. This is particularly praiseworthy in these days with tight finance and little incentive or encouragement to embark on the challenge of refurbishing and finding appropriate uses for the older fabric of our towns. It is an antidote to blight which can drag down a neighbourhood, and is a practical application of current principles of conservation.

The full illustrated list of awards for these two years can be seen on the Awards pages of this website, as well as those of past years, from the very first in 1979.

Dorset Council has announced that the Local Plan preparation process is now delayed two years, with the adoption a new plan now expected in 2026. Together with about 9,000 others, we responded to the original consultation in January 2021. Since then representatives of the Council have had discussions with Michael Gove as Secretary of State for Levelling Up, and we now read that Dorset is to be a pilot for a new national approach to local plans. (This has since been modified to say that “the Council has asked for Dorset to be a pilot for this new approach”.)

Meanwhile, the Council are seeking confirmation of a temporary exemption from the 5-year housing land supply requirements until the plan is adopted, to protect Dorset from harmful unplanned development. Although delayed, this sounds like good news if it will result in a better Local Plan in the end. 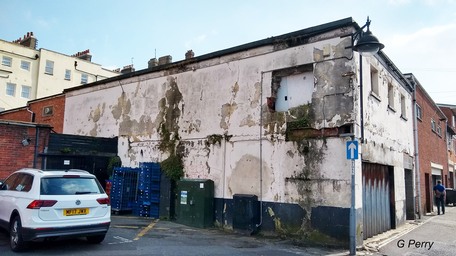 It is an extremely rare and most welcome experience to see a planning application for a housing development which will be 100% affordable. This is one such example. The application involves the demolition of the rear part of an Esplanade property, an unsightly looking large plain block, to be replaced by a new building housing 24 flats.  In appearance this is a Georgian inspired design intended to complement the local area, which looks broadly similar to an already approved application for 26 flats on this site.
This new proposal for 100% provision of affordable flats comes as a complete turnaround from the previous approval which was for open market housing, granted following the applicants’ claim that it would be unviable otherwise. We have written to the Council in support of this current proposal for full affordable provision - a welcome change in approach, to develop the site in the wider interest of the local community. 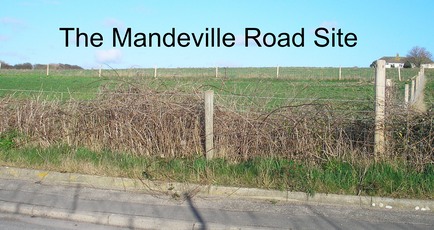 This site is an open field high on the hill near where Value House Stores used to be.  There is good news, especially for local people, that the planning application for 36 dwellings has now been withdrawn by the applicants. This is the second abortive attempt to gain planning permission for development here, the first application for 91 dwellings having been refused by the Council (at that time West Dorset District Council). Both resulted in numerous objections from neighbouring residents.

Our own main concern with this latest proposal was that the site extended along the whole frontage of Mandeville Road, which would have completely blocked off the remaining open gap.

These works now appear to be completed and in operation.  We find that the revised car parking arrangement makes parking easier, though we have doubts about the exit arrangements.  The new, wider footpath and cycle link (‘pocket park’) leading to Jubilee Retail Park is also an improvement, replacing the section of the old railway line which was still lingering on, closed off, useless to the public, and very unkempt. 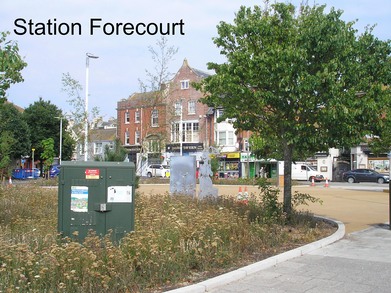 However, we are still sceptical as to the benefits to the station forecourt this expensive scheme may have achieved over the previous layout. It will remain to be seen how well the ‘perennial planting beds of wild flowers’ will survive over time in this very urban location, or how good the wide expanse of pedestrian area will look in the future. 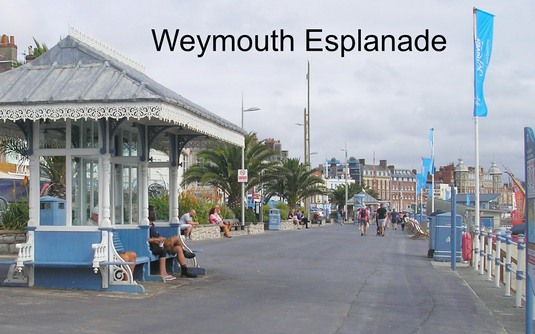 We have written to Hemingway Design offering some comments following their consultation on the Seafront Masterplan. We stressed the exceptional historic character and significance of the Esplanade which must be respected and taken into full account, and the overriding need for adequate funding for high quality maintenance of the historic terraces and other assets.

We recommended that any redundant and unnecessary features could be removed or rationalised to reduce clutter, and that any improvements must be planned with greatest sensitivity.

Quayside Bar & Kitchen, 7 Custom House Quay.  We have learned that the refusal of planning permission for the new set of windows on the frontage of the Quayside Bar has now been reversed, following an appeal, and they are now permitted to remain in place. While this result is not surprising, given the fact that these modern windows had been installed already, it is regrettable that they have completely altered the look of the building, in our opinion to its detriment, with the windows appearing as voids when seen from across the harbour.

Custom House Quay. The major make-over of Custom House Quay is now complete. We are sure everyone is relieved that the pale green walkway disappeared, now having became a more acceptable creamy beige. Some fine benches have been installed, of oak and Portland stone. A forest of posts has also sprung up, demarcating the various uses of the space.  The removal of parked cars and new layout have certainly made this a most popular area for strolling and sitting. We remain concerned that the unsightly temporary railings are still in place, that there are no spaces for vehicles to draw in to for deliveries on the landward side of the road, and that the two parking spaces for disabled people are in a location with no direct access to any walkway. 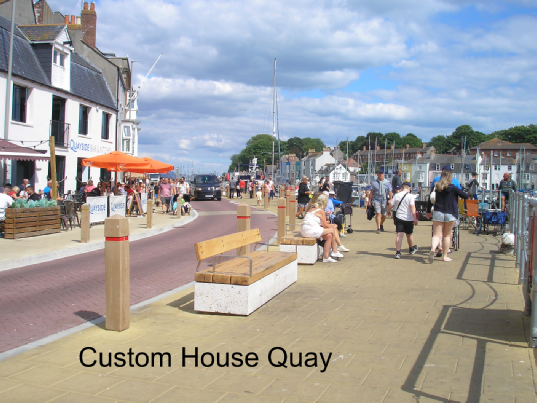 Outdoor Seating. While Custom House Quay has become a real go-to venue, with provision for seating for pubs and restaurants forming part of the overall scheme, the businesses on Trinity Road on the south side of the harbour have not fared so well, with their sitting-out areas to be closed at the end of this September.  As the government is now allowing the current pavement licences to be issued until 30 September 2023, we have written to the Council noting this, and the contrast between the treatment of the businesses on the two sides of the harbour.  Of course, on Trinity Road the seating areas are taking up space on the roadway itself, and we hope that a balance can be struck between the various users of this stretch of road.

CAMPING AND CARAVANNING
In a popular holiday area there will always be opposing views on camping and caravan sites, especially those near the coast.   On the one side, for local people they may be a noisy nuisance, generating excessive traffic on local roads and lanes, and for walkers wishing to enjoy the unspoilt Dorset coast they can be an eyesore and a blot on the landscape. On the other side are the site operators who have an interest in maintaining and expanding their businesses, and campers visiting the area, who naturally like to stay in locations as close to the sea as possible. Below are two such cases.

P/FUL/2022/01957 Eweleaze Farm, Osmington – Agricultural Land to Camping Site.
Eweleaze Farm covers a wide area of coastal grassland (36 hectares) near Redcliff Point, east of Bowleaze.   For many years there has been camping over these fields for 28 days each year, permitted under planning rules as a concession to farmers.  This has been of long-standing concern to our Society:  the intrusive clutter of tents, vehicles and related facilities, catering for thousands of campers each year, in this prominent position next to the Coast Path, is visible from a wide area around.  It detracts from the qualities of this very lovely open coastal landscape and from the enjoyment of it by local people and visitors to the area.

We have always accepted camping and caravan sites in suitable locations, but not where they spoil the very beautiful coastal scenery of Dorset.  We therefore objected to an application to the Council to double the length of time allowed to 56 days.  This was refused, but since then the applicants have come back with a reduced application for42 days.  We again objected, as did the Dorset AONB Team as well as numerous local people for various reasons.  Nevertheless, despite the Planning Officer’s recommendation of refusal, the Council’s Area Planning Committee has now approved the proposed 42 days duration.  Our fear is that this may set a precedent, leading to pressures for further such developments for ever longer periods.

P/FUL/2022/01431 – Haven, Weymouth Bay Holiday Park
Planning Application for Outdoor Stage, Bar and other Items.
There have been strong local objections to this proposal for an open-air bar and a stage, with entertainment including live and recorded music, in a part of the caravan site very close to the neighbouring houses of Preston, and we have written with concerns about the potential noise problems for local residents.  Despite all protests, a licence for these activities has now been agreed by the Council (although subject to more stringent time conditions than requested), leaving the planning application for this development still to be determined by the Council.


COMMITTEE NEWS
We are very sorry that Gerald Mabb has had to resign from the Planning Committee owing to ill health.  He has been a long-standing and stalwart member of the Committee, bringing to it his civil engineering expertise when needed, and in particular his deep interest in and concern for the history of our local area.  We wish him well, and will continue to stay in touch and keep him up to date on our work and interests.  Our numbers are now reduced to five, since Pru Bollam also retired from regular participation in the Committee’s activities.